Sliding patio door lock questions that have been sent to me over the years. I hope you can find help for your own problem by skimming through these examples.

Have a vinyl glass patio frame and mortise lock broken. Original handle mounting holes and keyway hole are drilled through inner metal frame to deep for a universal replacement to be installed easily. Do I need to remount and re-drill all the hardware?

The easiest fix would be to attach a surface mount patio door lock. These can be adapted to just about any patio panel.

The only trick would be adapting the lock keeper to mount on the casing on the side door jamb. Call me or contact me using the numbers on the home page if you need more help. 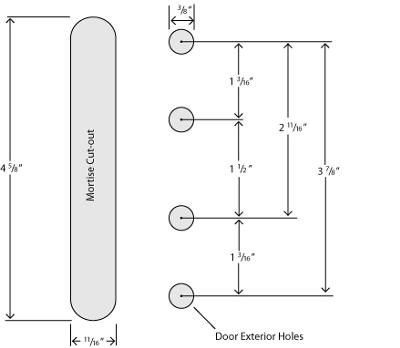 Dimensions for Anderson mortise lock cutout. The extra round holes allow for the mortise lock lock to be flipped over as a way to accomodate left or right hand doors. 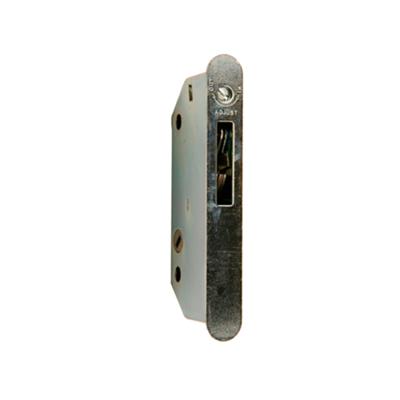 Our sliding glass door has been broken since the first week we moved into our home 7 years ago.

I tried and tried back then to figure out a remedy, but in the end I eventually settled with cutting a space two-by-four to act as a security brace.

Now we are selling our home and I can't ignore the sliding glass door any longer.

Basically, the panel is missing the mortise lock hardware and the handle. Using my handy calipers, I measured the holes that were cut for the handle and the mortise lock, and since then I've been searching for suitable replacement parts.

I don't have any idea who manufactured the panel, but I have managed to put together a 1:1 scale diagram of the door's hole placements.

I'm getting desperate to find a working solution. We need to put the house on the market within the week, and souring the net for a sure solution is wearing me down.

I converted my cutout diagram to a jpg and did my best to preserve the scale. As long as the server doesn't resample my image, everything should line up correctly.

After a lot of searching this looks to me like an Anderson panel. Their old mortise lock design certainly fits the mortise drawing you have provided.

The hole 2-9/16 hole centers on the Anderson lock dont match up though. I think you are going to have to drill at least one extra hole through the door to get an Anderson handle set to fit.

This shouldnt be a huge big deal since the holes will all be covered up by the handle set. 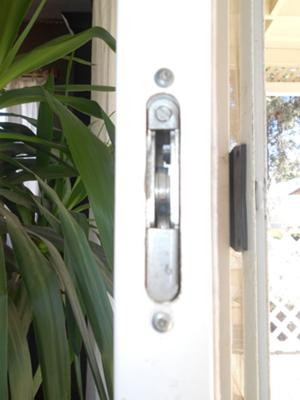 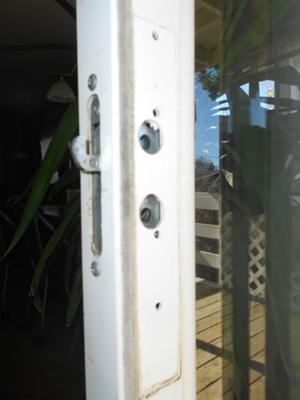 I have a nice, double paned, Guardian sliding glass door circa 1992 and the mortise latch needs to be replaced for the exact reason you mention: the latch has become very loose and it typically stays inside the lock and won't extend when we want to latch the door.

The problem I've run into is that it doesn't appear that I'm going to be able to remove the worn out mortise latch as the hole in the door is too small for it to be removed (see photos). It appears that Guardian manufactured the mortise latch inside frame before completing the assembly of the door. Since the corner joints of the vinyl door are welded together, I don't appear to have access to the latch from the back side either.

My question is, what can be done at this point? I really don't want to have to replace the entire door as this is far more costly than just replacing the latch. Do you know what can be done in this case? Thank you for any advise or help you can provide.

Normally the mortise latch comes out through the oval shaped hole it is mounted into. First use a pin or small screwdriver to hook out the broken latch hasp and then clamp some locking pliers onto it so the latch does not fall back inside the door.

You already have the handle removed which is the first step. Then remove the screws on the top and bottom of the oval shaped hole. The lock will now be free to move.

You need to keep a good grip on the latch hasp yet have enough room to push the latch backwards and tilt it until the top edge starts to come through the oval shaped hole.

You could also wrap a piece of wire around the hasp and tie it off. Lots of ways to prevent the latch from dissapearing inside the door. If it does fall in you will have to use a magnet on the end of a long thin stick or take the door off and remove the bottom to get it out.

I affixed my vice-grips to the latch like you suggested and it came right out. I thought everything I was seeing that was metal was supposed to come through the hole, including the cage in which the removable part rests. Yes, I feel silly. But I bought a replacement at the hardware store and for just over fourteen bucks, my door is finally fixed. It's been years. Thanks for your help!

Awesome ! Glad to hear it worked out for you !

Thank You for the
patio door latch advise

I have been back and forth to Lowes and Home Depot here in Metro Atlanta trying to obtain the correct part to fix the latch on my sliding glass patio door.

I happened across your site after asking a locksmith who was at my workplace, and he had no clue what the thing was. (Oddly enough, I had the part in my purse because I had stopped at a hardware store this morning).

You site showed clear pictures of the mortise latch, explained the differences between the 2013 and 2014, and I know what I need now!!

You have been a lifesaver for this single woman who is trying to do it herself and not pay a service man hundreds of dollars for a part that is less than $20.

Thanks so much for the kind words Justine !

Helping people save money on repairs is exactly why I put this site together.

It's fine to have big box stores but all to often the staff dont know what they are selling. I like to bring the atmosphere of the old time hardware store to the web.

I dont sell a lot of stuff but I do know my products inside out and backwards.

If you need the E2014 lock I have plenty in stock, just order it off the sliding door locks page

Happy to hear that I was able to help out!

My patio door is Guardian. I found the door handles but cannot find anyone selling the mortise latch. How can i check exactly which mortise latch would fit my door ? 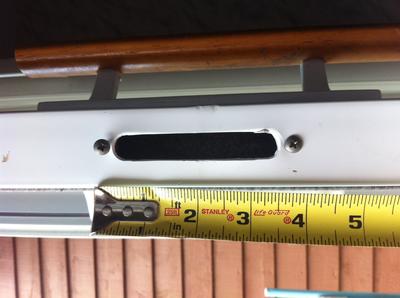 I have an older patio panel, with a Truth Entry Gard Handle/Lock. Recently it became harder to lock. There is an external key lock and an inside sliding lock. It has gotten to the point, where it will not lock at all.

I have cleaned the tracks, tried graphite and lubricant in the lock. Where the lock meets the frame it is smooth with no mechanical parts to connect to the frame.

On the upper and lower track there is a metal frame where their is a grove for something to come out of the door and slide into.

Is there some easy procedure to solve this problem or what other ideas would you suggest.

Anytime a patio door lock does not latch I start with chcking the alignment of the door.

When the door is closed is the door in line with the jamb ? When you just open it 1 inch, can you see a larger gap at the top or the bottom ?

The gap should be the same all the way down.

It if is not, adjust the door rollers at the bottom of the door to get it lined up.

If that does not get the door locking again, try marking the location of the hasp with a piece of masking tape then open the lock and close the door slowly.

The masking tape hangin out when the door is almost closed allows you to see where the lock is in relation to the hasp.

If it is too high or too low there are usually slots and screws in the hasp that allow you to adjust the height using a screwdriver.